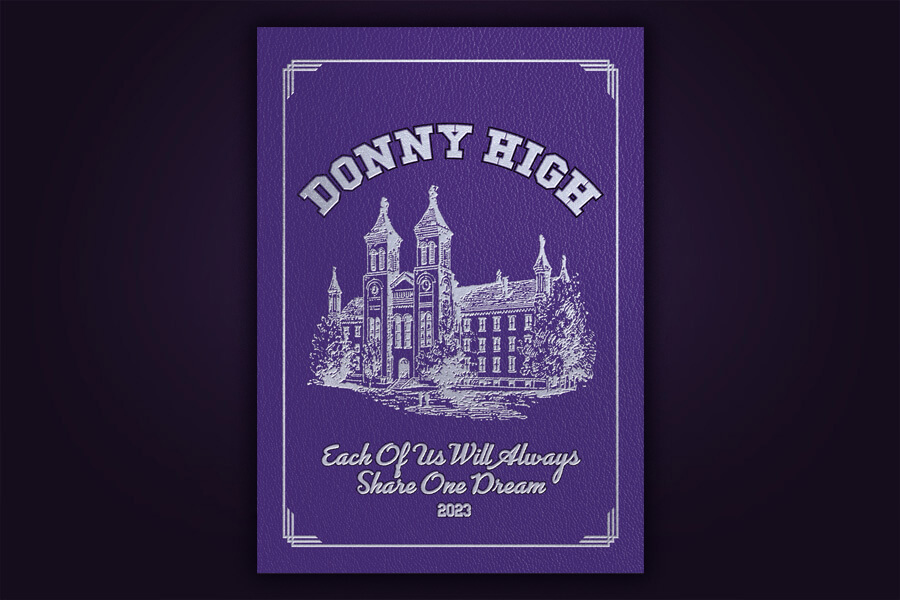 I am getting so excited for our upcoming reunion in January! I have some exciting news for all of you attending. We have decided to compile our first ever “Donny High” yearbook as an exclusive free gift to anyone attending our reunion. You and all your fellow Donny fans can sign each other’s yearbooks and I will be happy to sign as well.. anyone have a purple marker?!

We want to fill in the yearbooks with your favorite fan photos from over the years and here is where I need YOUR help!

I have created an email address where you can submit your favorite photos for a chance to be included in the book. We can’t promise we can include all of them- but we will do our best!

To get started, please read and agree to the following release!

For good and valuable consideration, the receipt and sufficiency of which are hereby acknowledged, the undersigned (the “Licensor”) hereby grants Donny Osmond Concerts, Inc. (the “Licensee”) and its sublicensees, designees, and assigns, a perpetual and irrevocable right to use and to authorize the use of certain photographs (each, a “Photograph,” and collectively, the “Photographs”) owned and/or controlled by Licensor, copies of which are attached hereto as Exhibit A and incorporated herein by this reference, throughout the Universe (the “Territory”) on the following terms and conditions:

1. Licensee may use and/or exploit the Photograph(s) for promotional purposes, in every manner now known or hereafter devised, including, without limitation, on and in connection with a so-called “fan yearbook” which Licensee may print and/or publish in both physical and/or digital form and for promotional purposes in connection with such “fan yearbook,” Licensee, and/or performances by the musical artist Donny Osmond. Licensor hereby warrants and represents that Licensor exclusively owns and/or controls all rights necessary to enter into this photo license and release (the “Release”) and grant the rights contemplated herein; Licensor is the sole owner of all rights, including the worldwide copyrights, in and to the Photograph(s); all elements (including photographs, artistic and literary materials, ideas and other intellectual properties) embodied in the Photograph(s) are Licensor’s original contributions or are in the public domain throughout the Territory; no use by Licensee or its sublicensees, designees, and assigns of the Photograph(s) shall violate any law or infringe upon or violate the rights of any person or entity (including contractual rights, copyrights, rights of publicity and rights of privacy); Licensor has not done or permitted and will not do or permit any act or thing which shall or may impair in any manner the rights granted herein; and there exists no litigation, dispute, claim or action in connection with the Photograph(s).

2. Licensor hereby grants Licensee and its sublicensees, designees, and assigns a perpetual and irrevocable right (but not the obligation) to photograph, film, and/or record Licensor, including, without limitation, Licensor’s name, image, likeness, and voice (collectively Licensor’s “Likeness”) during and in connection with an event occurring on January 26, 2023 (the “Event”), including, without limitation, in respect of “behind the scenes footage” of the Event; embody Licensor’s Likeness in footage and/or audio-visual recordings of the Event (collectively, “Recordings”) and in promotional, marketing, and advertising materials created for the Event and Producers (the “Marketing Materials”); and (iii) use and exploit the Recordings and Marketing Materials throughout the Territory by all methods and means now known or hereafter devised, in all media now known or hereafter devised, in perpetuity, for all purposes Licensee may determine (in its sole discretion). Licensor irrevocably and unconditionally waives any right to inspect or approve the Recordings, the Marketing Materials, or materials embodying Licensor’s Likeness.

a. Licensor acknowledges and agrees that the Licensee shall own the Recordings, the Marketing Materials, and all results and proceeds thereof (including, without limitation, Licensor’s Likeness but excluding the Photographs), including all worldwide copyrights therein and thereto for the life of copyrights thereof (including all extensions and renewals thereof) as so-called “works made for hire” for Licensee, as that term is defined under the United States Copyright Act of 1976, as amended. To the extent the Recordings, the Marketing Materials, Licensor’s Likeness, or any results or proceeds thereof (excluding the Photographs) are determined to not be “works made for hire” for Licensee, Licensor hereby irrevocably assigns and transfers to Licensee all Licensor’s rights therein and thereto, in perpetuity and throughout the Territory. Licensor agrees to execute any additional documents that Licensee deems necessary to effectuate any such assignment and transfer.
b. Licensor understands that Licensor’s actions during the Event (or the actions of others), and any information revealed about Licensor, may be private, sensitive, defamatory, disparaging, embarrassing, or unfavorable. Notwithstanding the foregoing, Licensor consents to and assumes all risk of Licensee including Licensor’s Likeness and any such information or material in the Recordings, even if such inclusion might otherwise constitute an actionable tort. Licensor unconditionally releases the Released Parties (as defined below) from and covenants not to sue the Released Parties for any claim or cause of action, whether now known or unknown, for libel, slander, invasion of the rights of privacy, publicity or personality, or any other claim or cause of action based upon, or relating to, the exercise of any of the rights granted hereunder.
c. Without limiting the generality of the foregoing, Licensor hereby acknowledges and agrees that the “Released Parties” and persons authorized by such Released Parties shall have the exclusive and perpetual right throughout the Territory to alter, change, modify, and edit Licensor’s Likeness and any reproduction or derivative created therefrom in connection with the grant of rights set forth above. Accordingly, Licensor hereby irrevocably and unconditionally waives all moral and similar rights of authors throughout the Territory in respect of Licensor’s Likeness and the Recordings.

3. Licensor, on behalf of itself and its heirs, executors, administrators, agents, assigns, and anyone purporting to act by or through Licensor, hereby voluntarily releases, discharges, and covenants not to sue, to the fullest extent permitted by law, Licensee and all current and former officers, employees, directors, agents, managers, representatives, successors and assigns, in both their individual and official capacities (collectively, “Released Parties”), from and against all claims, demands, liabilities, causes of action, and damages of any and every kind (collectively, “Claims”) arising from or relating to the Event or the use and/or exploitation of the Recordings, the Marketing Materials, Licensor’s Likeness, the “fan yearbook”, and the Photographs and any exploitation of the foregoing elements by the Licensee and/or third parties authorized by the Licensee; and Licensor’s attendance and/or participation in the Event. 4. Notwithstanding the terms set forth in this Release, Licensor acknowledges that Licensee shall have no obligation to include the Photographs in the “fan yearbook” or to use or exploit the Recordings or Marketing Materials (or use or exploit Licensor’s Likeness in connection therewith or otherwise). Licensor acknowledges that it shall not be entitled to rescind this Release or , seek or obtain any injunctive or other equitable relief, or enjoin or impair in any manner the development, production, or exploitation of the Event, the Recordings, the Marketing Materials, or the “fan yearbook” (including, without limitation, any distribution thereof). 5. This Release constitutes the entire understanding of the parties with respect to the subject matter hereof. It can only be amended by a written agreement, which is signed by the parties. It is binding upon and shall inure to the benefit of the parties’ respective licensees, successors, and assigns. The parties acknowledge that this Release may be executed in counterparts, each copy of which shall be deemed an original but all of which together shall constitute the same instrument. This Release shall be governed by and interpreted pursuant to the laws of the State of California applicable to agreements wholly negotiated, executed, and performed within such State.