Here you will find a comprehensive bio on Donny Osmond. 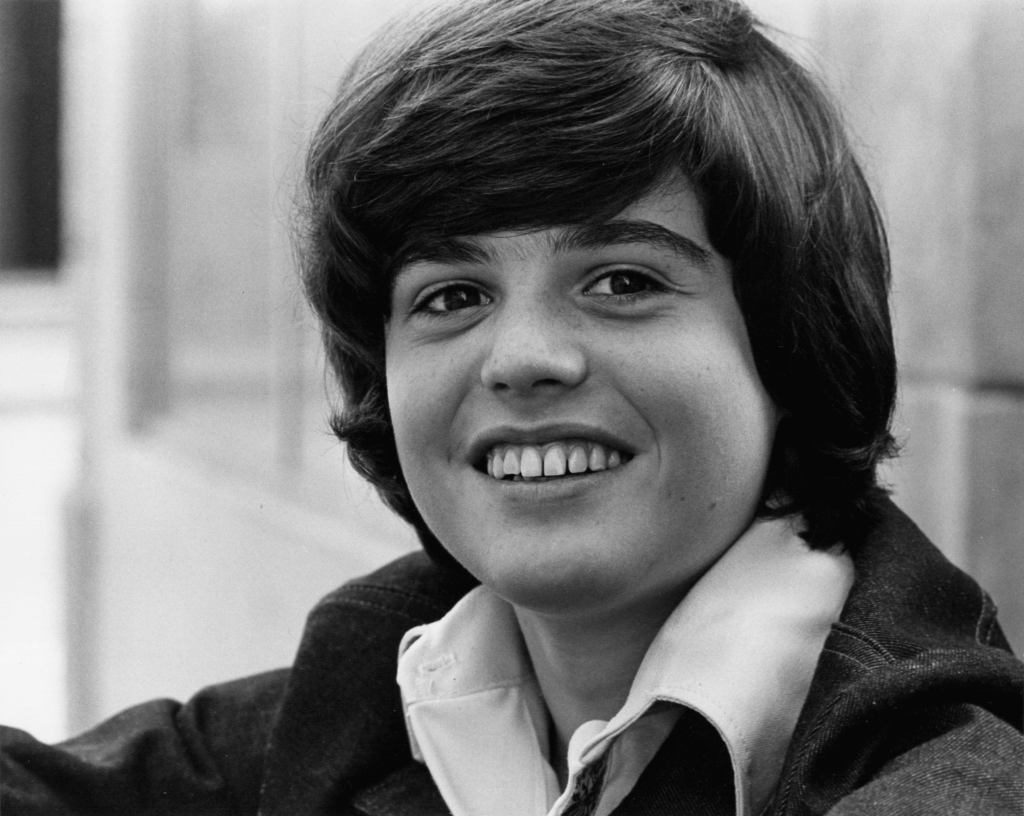 Donny Osmond has been a singer, actor, triple-threat television series host (talk show, game show, variety show), best-selling author (his autobiography entered the UK bestseller chart at #1), commercial spokesman, motivational speaker, and even a racecar driver.
Throughout his illustrious career, Donny has earned 33 gold records; selling over 100 million albums becoming a worldwide music legend. He has made history by celebrating almost 6 decades in show business with the release of his 61st album, One Night Only: a live album accompanied by a DVD of his sold out UK tour in January, 2017.

Donny’s latest album Start Again which debuted in the fall of 2021, marks a milestone 65th album for the performer. The 12 track Pop/R&B Start Again is Donny’s first full length solo album in 7 years and features collaborations with such notable performers as Charlie Wilson and Pierre Bensusan and songwriters 9am, Ant Clemons, Dalton Diehl, Jason Mater, Jonas Myrin, Larrance Dopson, Ne-Yo, Seth Reger, Space Primates and Amy Wadge. Additionally, in a career first, Start Again is entirely co-written and produced by Donny. The album was directly inspired by Donny’s own unique career journey of constant reinvention over the course of his six decades as a world recognized performer. The first single “WHO” and its accompanying music video were released on June 30, 2021 and quickly rose to the top of iTunes charts. 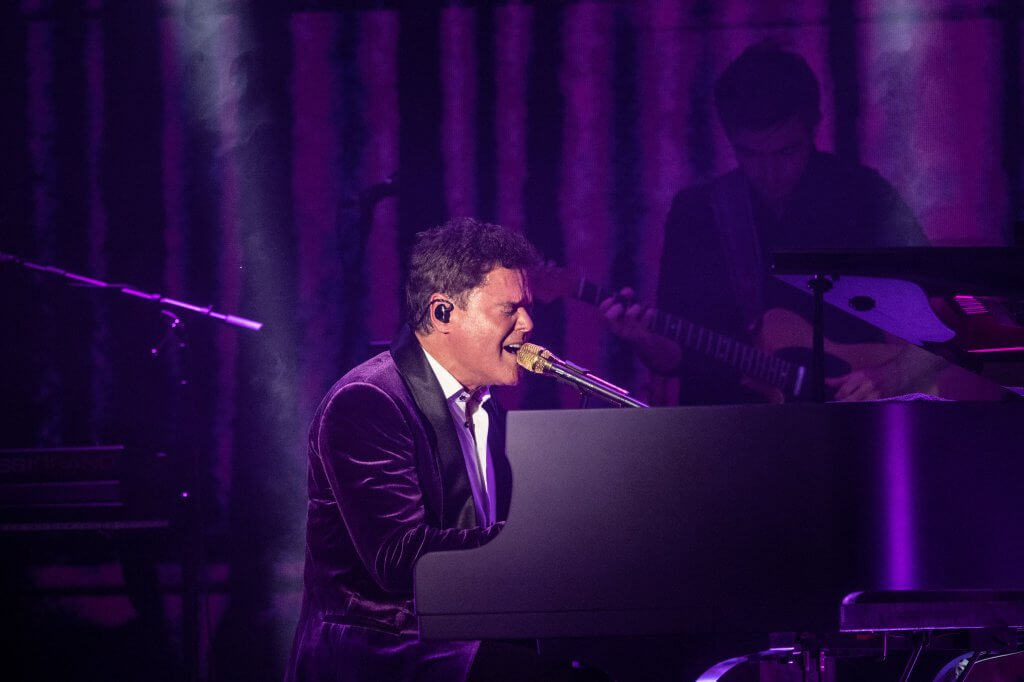 In an unprecedented and history-making deal for Harrah’s, Donny headline’s his first ever solo residency at Harrah’s Las Vegas which was voted Best New Show and Best Performer by the public in the Best of Las Vegas honors from The Las Vegas Review Journal. Donny’s return to the stage is an exciting, energy-filled musical journey of his unparalleled life as one of the most recognized entertainers in the world. Guests experience a party as he performs his timeless hits, shares stories of his greatest showstopping memories and introduces brand new music in a brand new and completely reimagined song and dance celebration.
For eleven years, Donny performed at the Flamingo Las Vegas with his sister, Marie. The show began back in September 2008 and was originally scheduled to run for six weeks. The audience response was so overwhelming that the Flamingo renamed their showroom, “The Donny & Marie Showroom.” The long running show based on the famed Las Vegas Strip, received many accolades during their run. They were awarded “Best Show,” “Best Singer,” “Best Band,” and “Best Dancers” throughout the years according to the Las Vegas Review Journal.
Donny has notably entertained a vast array of audiences with his varied career choices. He has starred on Broadway as Gaston in Disney’s Beauty and the Beast; hosted two television series on British network television; and performed at the Concert for Diana, seen worldwide by more than two billion viewers. The critically acclaimed song Captain Li Shang’s “I’ll Make a Man Out of You” from the Disney film “Mulan” was sung by Donny. The song and Donny’s singing of it received accolades from around the globe and ranks as one of the most popular and enduring Disney tunes of all time. 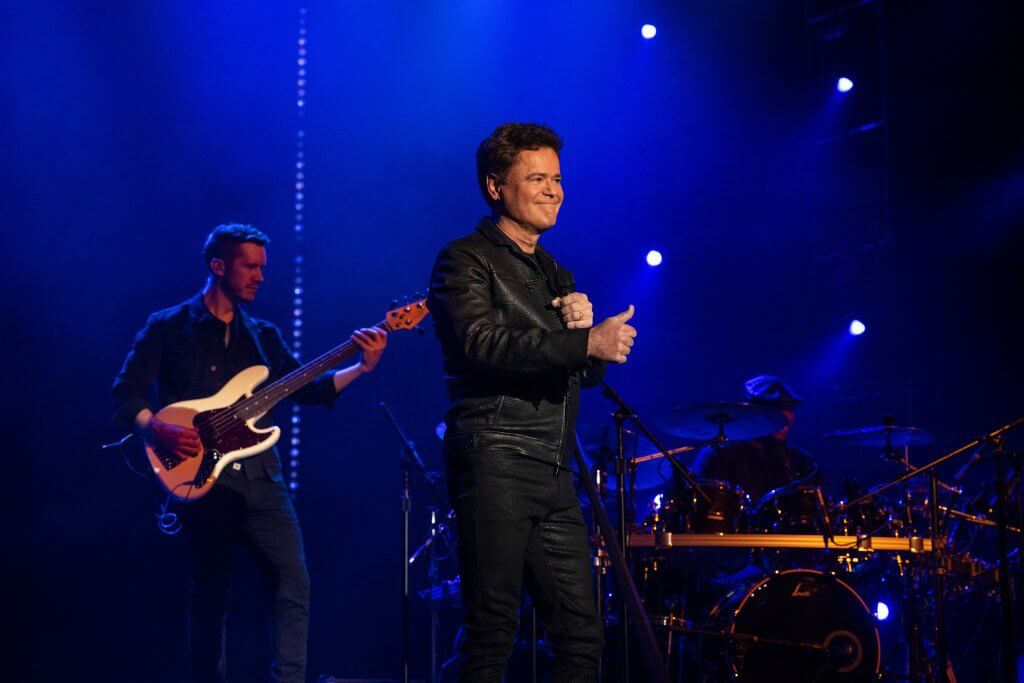 Most recently, Donny stunned audiences across America when it was revealed that he was the very first entertainer as well as the fan favorite “Peacock” on the hit Fox musical competition show “The Masked Singer.” The show, which launched in January is the most well received and well rated reality show in over ten years of American television. Donny finished the show runner-up to rap and R&B singer, T-Pain.
2008 marked the 50th year celebration of the Osmond Family in entertainment. The entire family made a historic appearance on Oprah, which set a daytime ratings record and made Oprah’s list of Top Ten Best Celebrity Moments. The family then toured The UK, Australia, and Asia for the first time in 27 years to sell-out crowds.
In 2009, Donny was crowned Dancing with the Stars champion (the show garnered 37 million viewers weekly). One of Donny’s most notable appearances was his starring role as Joseph in Sir Andrew Lloyd Webber’s Joseph and the Amazing Technicolor Dreamcoat, which broke records during its six-year run with more than 2,000 performances in the US and Canada.
In Spring of 2018, Donny wrote a customized video birthday e-card for American Greetings with more than 1,000 names to choose from. Donny does the honors by dancing and singing his way through a fun birthday song customized for whomever you choose. People of all ages have been blown away by the personalized (and hilarious!) wishes in which Donny actually sings their name and age for a truly unique birthday greeting. 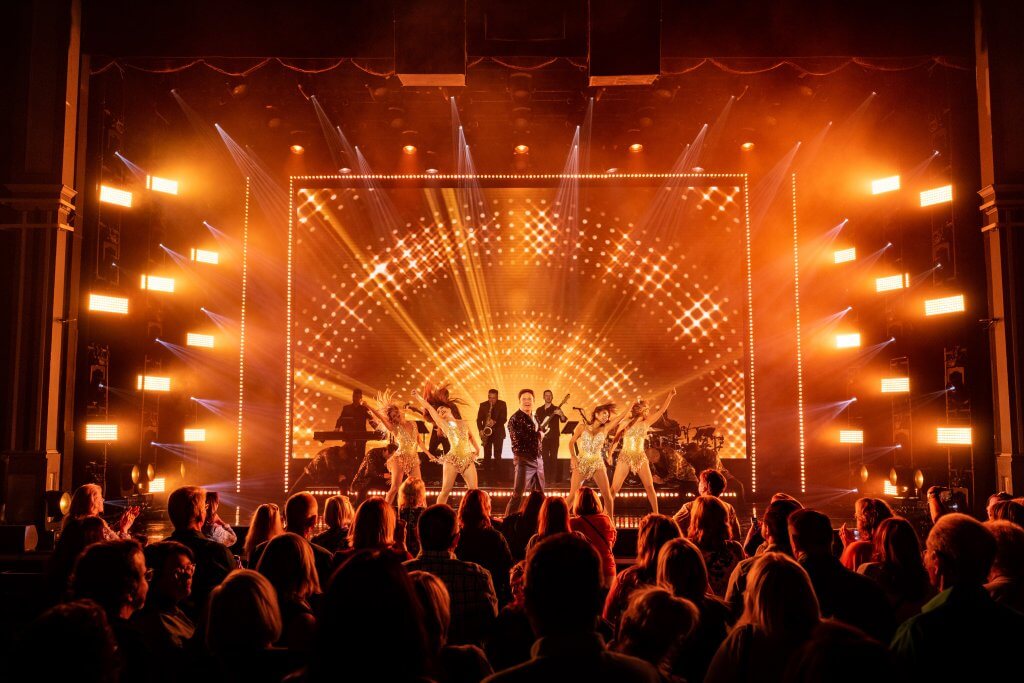 In August of 2018, Donny collaborated with rapper Lil Yachty for Chef Boyardee’s highly successful, vintage-style commercial. This unlikely pairing proves Donny’s philosophy that sometimes you need to think outside to box to score a lasting impression. Judging from the public’s reactions, Donny and Yachty wrote the perfect hip-hop jingle that expertly positions Chef Boyardee to all ages.
Donny’s multi-generational worldwide fan base is reflected in the 100 million plus annual hits on his official website, Donny.com, and social media sites. Donny and Debbie, his wife of 44 years, have five children and thirteen grandchildren.
For more information, visit Donny.com  – facebook.com/donnyosmond.fb – instagram.com/donnyosmond – twitter.com/donnyosmond
Download for Media Purposes Download Residency Announcement for Media Purposes