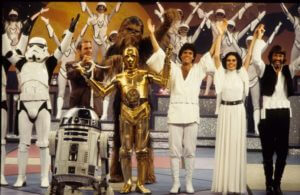 George Lucas and his publicity and merchandising man, Charles Lippincott, wanting to capture the young market with their blockbuster, Star Wars. Television was a key part of their strategy. Two things happened on ABC that boosted the film’s profile. The first was the transmission of The Making of Star Wars and one week later, Donny & Marie was the second.

I’m not really a Star Wars fan, but I do love the D&M shows!

Why is Paul Lynn tied up?:) lol

I was there in the studio when you taped this in September !977!!